The gallery of the evidence used during FBI Major Case #203: The Pizza Bomber Case.

Brian Wells stands at the front counter of the PNC Bank in the Summit Towne Centre, waiting for the chief teller to give him money on August 28, 2003. He had asked for $250,000, an extraordinary amount for a bank robbery. RICH FORSGREN/ERIE TIMES-NEWS, via FBI 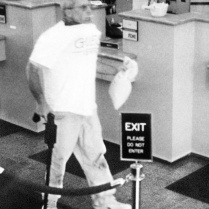 Brian Wells heads out of the PNC Bank in the Summit Towne Centre after robbing it of $8,702. Wells is carrying the cash in a white canvas bag; in his left hand is a homemade cane-shaped shotgun. He is sucking on a lollipop he grabbed while in the bank. The collar bomb is protruding from under his white T-shirt. He had demanded $250,000 from the chief teller, but left with whatever money she could give him. ERIE TIMES-NEWS, via FBI 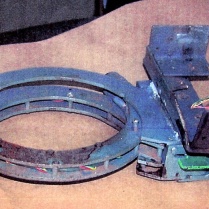 The metal collar that held the bomb to Brian Wells was intact after the explosion; it operated like a large handcuff that was locked to his neck. The metal box that held the bomb mechanism was attached to the frame of the collar. RICH FORSGREN/ERIE TIMES NEWS, via FBI

The locking mechanism for the collar bomb; the metal box that contained the locks was attached to the collar. Wells was to go on a scavenger hunt to find the keys. RICH FORSGREN/ERIE TIMES-NEWS, via FBI 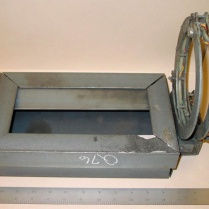 The FBI built this model of the collar and the box that contained the bomb; the box is empty of components. The collar is attached backwards here; Wells wore the bomb with the open section away from his chest, rather than against it. ERIE TIMES-NEWS/FBI

This FBI model of the bomb box shows its construction out of angle iron. ERIE TIMES-NEWS/FBI

Whoever built the collar bomb used machine tools to cut and join the components, shown here in an FBI model. ERIE TIMES-NEWS/FBI

The FBI lab in Quantico, Va., used evidence collected from the scene of the bomb blast to reconstruct the bomb mechanism that hung from the neck of Brian Wells. Only one of the pipe bombs exploded. A metal plate covers the kitchen timers that were so crucial to the bomb’s design; the metal mesh was a booby trap designed to detonate the bomb if the mesh touched the metal of the frame. The entire contraption weighed 10 to 15 pounds. FBI photo, used as evidence at trial

The cane gun Brian Wells used during the bank robbery. It was fashioned by hand out of wood and metal, and held one 12-gauge shotgun shell. Wells did not fire it. RICH FORSGREN/ERIE TIMES-NEWS, via FBI.

The first page of the two-page note found in Wells’ car; the note, addressed to the “bomb hostage,” instructed him how to rob the bank. ERIE TIMES-NEWS, via FBI 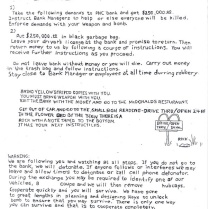 The second page of the note found in Wells’ car; the drawing showed him where to find another note: taped to the bottom of a rock at the base of a McDonald’s drive-through sign near the bank. ERIE TIMES-NEWS, via FBI

The note Wells found taped to the rock. It told him where to drive next to find clues and keys to unlock the collar and disarm the bomb. ERIE TIMES-NEWS, via FBI

The FBI constructed this diagram to show where Brian Wells was to travel to get the keys to unlock the bomb from his neck on August 28, 2003. He never completed the journey. Agents displayed the diagram at a news conference early in the investigation. FBI photo

At 1:30 p.m. on August 28, 2003, an order phoned in to this pizza parlor sent Brian Wells on his way in the bank-robbery plot that would end in his bombing death at 3:18 p.m. Wells, 46 years old, had worked at Mama Mia’s nearly a decade. ISAAC BREKKEN/ERIE TIMES-NEWS 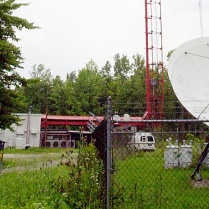 Brian Wells delivered his pizza order by driving his Geo Metro down a dirt road to this clearing, the location of the transmission tower for WSEE-TV, the CBS affiliate in Erie, Pennsylvania. He had the collar bomb locked to his neck in the clearing. RICH FORSGREN/ERIE TIMES-NEWS

Piles of junk and rotting food greeted Erie police officers and FBI agents when they searched Marjorie Diehl-Armstrong’s house after September 21, 2003. They were looking for evidence that she fatally shot her boyfriend Jim Roden and helped place his body in a freezer in Bill Rothstein’s garage. Diehl-Armstrong had history of hoarding government-surplus food. “I’ve dealt with corpses with the flesh falling off. This is worse,” a veteran Erie police officer said of Diehl-Armstrong’s house. FBI photo, used as evidence at trial 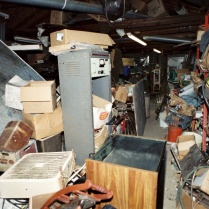 Bill Rothstein’s house was just as filthy and messy as Diehl-Armstrong’s. In his garage, where he had been storing Jim Roden’s body in a freezer, Rothstein also kept the bloody mattress (at left) on which Roden had died at Diehl-Armstrong’s house. FBI photo, entered into evidence at trial 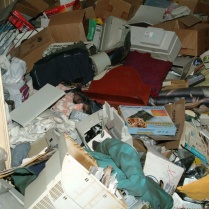 Ken Barnes’ house was in worse condition than those of Marjorie Diehl-Armstrong and Bill Rothstein. Barnes ran a crack house amid the trash; prostitutes turned tricks for drugs in a squalid bedroom upstairs, where Brian Wells spent time with prostitute Jessica Hoopsick. FBI photo, entered into evidence at trial

Ed Palattella and Jerry Clark can accommodate a wide variety of audiences and needs. Their talk includes a PowerPoint presentation that details the pizza bomber case, with plenty of never-before-seen photos and videos. Contact gcclarkjr@hotmail.com for more information.

Images from the Pizza Bomber Case