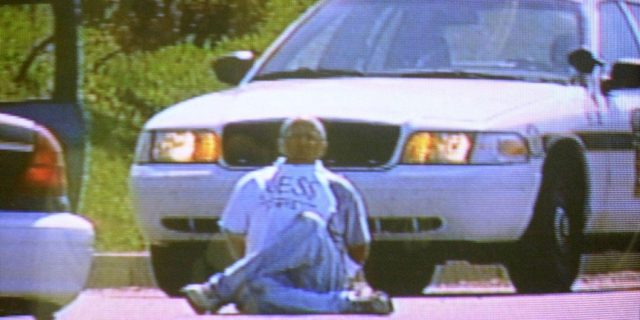 The pizza bomber case took more than seven years to investigate and prosecute, with FBI Special Agent Jerry Clark as the lead investigator. Here is a synopsis of some of the events in the probe, based on court records and other sources, and as compiled by Ed Palattella for the Erie Times-News.

— Aug. 28, 2003: Brian Wells is killed when a bomb locked to his neck explodes after he robs the PNC Bank in Summit Towne Centre, a shopping plaza just south of Erie, Pa. Wells tells state police before the collar bomb goes off that four black men forced him to wear the device and rob the bank. Investigators later determine Wells was lying. The night of Aug. 28, 2003: Federal agents search Wells’ house on Loveland Avenue in Millcreek Township. They find nothing to indicate the collar bomb was built there.

— Aug. 31, 2003: Robert Pinetti, Wells’ friend and co-worker, dies from what is ruled an accidental drug overdose.

— Sept. 8, 2003: Investigators pursue the lead about the black men by searching the Erie apartment of a black man whose girlfriend said she knew Wells. The man is never charged.

— Sept. 20, 2003: Rothstein calls 911 to report that the body of James Roden, Diehl-Armstrong’s boyfriend, is stuffed in a freezer in Rothstein’s garage. He blames Diehl-Armstrong.

— Sept. 21, 2003: Erie police charge Diehl-Armstrong in Roden’s death, alleging she fatally shot him at her East Seventh Street house, in Erie, sometime before Aug. 28, and then helped move the body to Rothstein’s upper Peach Street house, south of Interstate 90, in Summit Township, near Erie in southern Erie County.

— Sept. 24, 2003: Police and federal agents question Rothstein about the Wells case. He says he may have used the pay phone that was the source of the final phone call to Wells.

— Mid-March 2004: Diehl-Armstrong, who suffers from a bipolar disorder, is transferred from the Erie County Prison to Mayview State Hospital, near Pittsburgh, for a long-term psychiatric evaluation in the Roden case. She is off limits to investigators while at Mayview because of her mental state.

— July 30, 2004: Rothstein, 60, dies of cancer. He says nothing about the Wells case to investigators who question him on his deathbed.

— Jan. 7, 2005: Diehl-Armstrong pleads guilty but mentally ill to third-degree murder in Roden’s death in Erie County Court and is sentenced to seven to 20 years in a state prison.

— March 16, 2005: Diehl-Armstrong is transferred from Mayview to the State Correctional Institution at Muncy.

— April 20 and May 23, 2005: The main investigators in the Wells case — Jerry Clark of the FBI and Jason Wick of the federal Bureau of Alcohol Tobacco, Firearms and Explosives — interview Diehl-Armstrong. She talks about Rothstein but refuses to answer questions.

— July 5, 2005: Clark and Wick interview Diehl-Armstrong at the state prison at Cambridge Springs. According to the FBI, she says she killed Roden to silence him in the Wells plot, and she says she never spoke in detail about his killing because she feared it would implicate her in the Wells case. In the summer of 2003, she says, she gave Rothstein kitchen timers — integral components to the collar bomb — and was a quarter of a mile from the bank robbery site when Wells was killed. Diehl-Armstrong first raised the possibility of immunity during the interview; she kept talking, and never ended up getting a deal. She would later dispute the FBI’s version of her statements.

— July 19 and 20, 2005: Clark and Wick interview Floyd A. Stockton Jr., Rothstein’s housemate at the time Wells was killed. He says Rothstein and Diehl-Armstrong were involved in the bank-robbery and bomb plot because they needed money.

— Aug. 11, 18 and Sept. 13, 2005: Clark and Wick interview Kenneth E. Barnes, Diehl-Armstrong’s fishing buddy. He says Diehl-Armstrong before Wells was killed solicited him to kill her father to stop her father from spending her inheritance.

— Dec, 9, 12 and 14, 2005: Barnes meets with Clark and Wick. He says he, Diehl-Armstrong, Rothstein, Stockton and Wells met Aug. 27, 2003, to review the bank-robbery plot. Barnes says he and Diehl-Armstrong watched Wells through binoculars before he was killed.

— Feb. 14, 2006: Clark and Wick meet with Barnes. He gets upset when told of Diehl-Armstrong’s denials, calling her a liar.

— March 21 and May 5, 2006: Federal agents search Barnes’ then-residence in the 600 block of Perry Street, in Erie, for bomb-making components and other items.

— May 10, 2006: Diehl-Armstrong would talk to Wick and Clark a total of eight times. This was the date of her last interview. Along with her personal lawyer, Lawrence D’Ambrosio, who encouraged her to talk, she goes on a ride with Wick and Clark in Summit Township. She points out where she was throughout the day when Wells was killed, according to the FBI.

— July 9, 2007: A federal grand jury, which has been meeting in the Wells case for close to two years and was about to have its term expire, indicts Diehl-Armstrong and Barnes on the felonies of armed bank robbery, conspiracy to commit armed bank robbery and using a destructive device in a crime of violence. The grand jury names Wells and Rothstein as unindicted co-conspirators.

— July 11, 2007: The U.S. Attorney’s Office unseals the indictments. Stockton is not named in the indictments. He reaches an immunity deal with the government in exchange for testifying against Diehl-Armstrong and Barnes.

— Sept. 3, 2008: Barnes pleads guilty before McLaughlin to conspiracy to commit bank robbery as well as using a destructive device during a crime of violence, both felonies.

— Dec. 3, 2008: McLaughlin sentences Barnes, then 54, to 45 years in federal prison. He agrees to testify against Diehl-Armstrong.

— March 2010: Diehl-Armstrong has a cancerous lump removed from her neck, and is later diagnosed with glandular cancer that originated in one of her breasts.

— Aug. 12, 2010: At a court hearing, McLaughlin reviews a physician’s report that gives Diehl-Armstrong three to seven years to live. The prosecutor, Assistant U.S. Attorney Marshall Piccinini, said he plans to proceed with the trial; he said he would have considered halting the trial if the medical report had given Diehl-Armstrong less time to live. McLaughlin sets a trial date for Oct. 12.

— Nov. 1, 2010: After deliberating 11 hours and 30 minutes over two days, the jury convicts Diehl-Armstrong of all the charges.

— Feb. 28, 2011: McLaughlin sentences Diehl-Armstrong to life in prison, plus 30 years. The federal prison system has no parole.

Ed Palattella and Jerry Clark can accommodate a wide variety of audiences and needs. Their talk includes a PowerPoint presentation that details the pizza bomber case, with plenty of never-before-seen photos and videos. Contact gcclarkjr@hotmail.com for more information.

Images from the Pizza Bomber Case